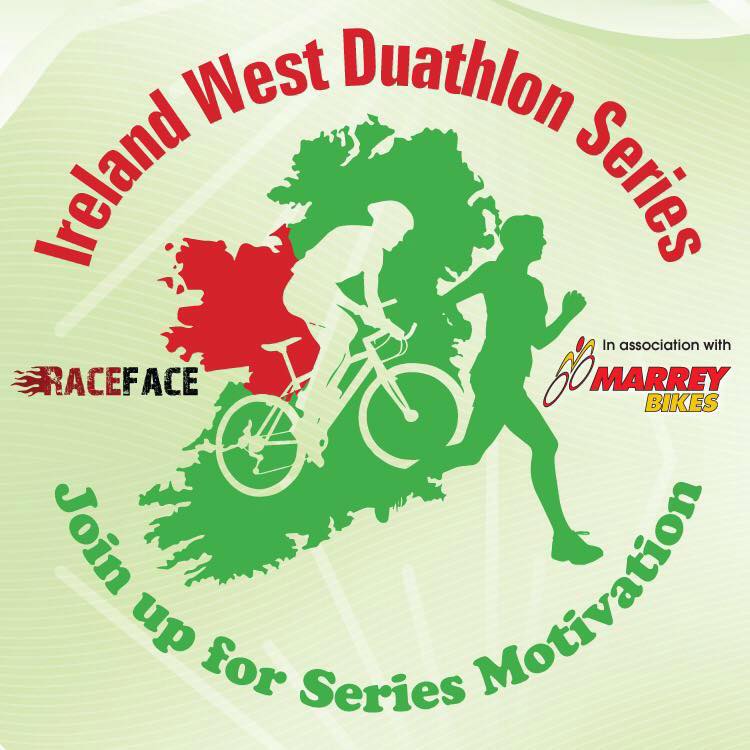 The Ireland West Duathlon Series was launched in 2015 by www.raceface.ie. The series consisted of 5 events which started in Claremorris on December 29th 2015 and finished on March 19th 2016 in Castlebar. I signed up for the €100 early bird option which is good value for 5 duathlons. Watch out for this offer if you plan to do the series later in the year. If you pay it up front it also motivates you to do all the events.

From a preparation point of view I did a lot of turbo training work during December. My application of choice was Zwift and I used a combination of structured workouts and virtual group cycles. I also participated in the Connacht cyclocross league which helped a bit with fitness. I wanted to make sure that I was in good shape for the cycling sections. When it came to the runs I did some track running and a few 5-10km runs around the town.

The first event in the series was the annual Land of the Giants duathlon which is held in Claremorris. It consisted of a 5.5km run, 18km cycle and 2.5km run to finish. Up on 300 participants took part and it was the largest event of the series. The first run goes around McMahon park and is a really nice run. I was around 25th place after the run. The cycle is flat enough with a small bit of hill work at the start and finish. I managed to get up to 7th overall after the cycle and I felt really good on the bike. Struggled a bit on the second run and I dropped 2 places to finish 9th overall. This gave me both the top local finisher and the over 40 prize. Full results here.

A recommended event if you are looking to burn off some Christmas excess on a flat course.

The second event was hosted by Tri lakes triathlon club. Weather conditions on the day were not good with lots of wind, ice and hail showers and this had an impact on the number of participants with around 90 completing the course. The event consisted of a 5km run, 20km cycle and a 2.5km run to finish. The run included a run up Knockma hill which meant we warmed up fairly fast. My problem on the day was running downhill. This may seem strange but there is a skill to fast downhill running. The cycle course was flat enough but the wind made it difficult. I finished 11th overall and I won the over 40 age category. This took me to 4th place overall in the series. Full results here.

A recommended event if you would like to tackle some hill running on trails.

The third event in the Ireland West Duathlon series took place in Ballinrobe. The format was a 5km run, 18km cycle and a 3.5km run to finish on very flat ground. I actually set my fastest 5km time at 20:31. For some reason I felt I was off form a bit of the bike and I really struggled to get going on the second run. The event was also very competitive with lots of top athletes. Finished 15th overall and 3rd in the over 40 category. Full results here.

A great event you want a fast course for quick times.

The fourth event in the series took place around the grounds of Ashford castle. The format was a 5km run, 20km cycle and a 2km run to finish. I struggled during this event as I got a cramp in my right calf after 1.5km of running. I had to slow down to prevent a more serious injury. I also made the mistake of not changing shoes for the cycle section. There are a number  of hills and I felt that cycling with runners on was a big disadvantage. I put the cramp down to a poor warm up. I find that I need to do around 2km of jogging prior to an event.

Finished 17th overall but the significant part for me that my club mate David Delaney made up some ground in the over 40 section in the duathlon series. Full results here.

A tricky event taking in forest running and a hilly cycle section.

The final event in the ireland west duathlon series was held in Castlebar. This used to be known as the Harlequin Adventure Duathlon but for this series the booster run was removed. The format was a 5km run, 29km cycle and a 5km run to finish. My head was in a much better place coming into this event and I prepared well for it. I also changed shoes for the cycle which almost ended in disaster when my foot slipped in the transition area and I came crashing to the ground. It did not cost me too much time but served as a reminder to calm down in transition areas as a lot of time can be lost with stupid mistakes. Finished 11th overall and 3rd in the over 40 section. Full results here.

Felt good on second run which now has given me the appetite to take on a longer event. Maybe race to glory later in the year.

An ideal event to get you ready for longer adventure challenges.

Now that I have the Ireland West Duathlon series behind me I have asked myself a few questions:

Was it worth participating in the series? Absolutely, great way to start the year. Very well organized with plenty of variety.

Was it tough? I struggled badly during the Ashford Duathlon and it was my bogey event. I enjoyed participating in the others and I pushed hard which made them tough but that is all part of the fun. Preparation and warm up are critical and I need to work on this.

Can anyone take part? Yes. You do need to do some preparation with a bit of running and cycling. You don’t need to go fast, organizers cater for all abilities. Another option is to put together a relay team so that one person does the runs and the other does the cycle.

Highs and lows? High point was finishing in top 10 in my home duathlon. This result put me in good shape for the rest of the series. Low point was probably half way through the first run in Cong when I had cramp issues. Had to slow down to try and prevent a more serious injury.

In the end I finished 5th overall in the Ireland West Duathlon series and I also came first in the over 40 category. I was delighted with this as I only started doing duathlons a few years ago. As a bonus the organizers invited the legendary cyclist Stephen Roche along to the prize giving and it was nice to get a few family pics with him. Final league standings available at this link.

This site uses Akismet to reduce spam. Learn how your comment data is processed.