Cycling Mizen to Malin in Less Than 24 Hours 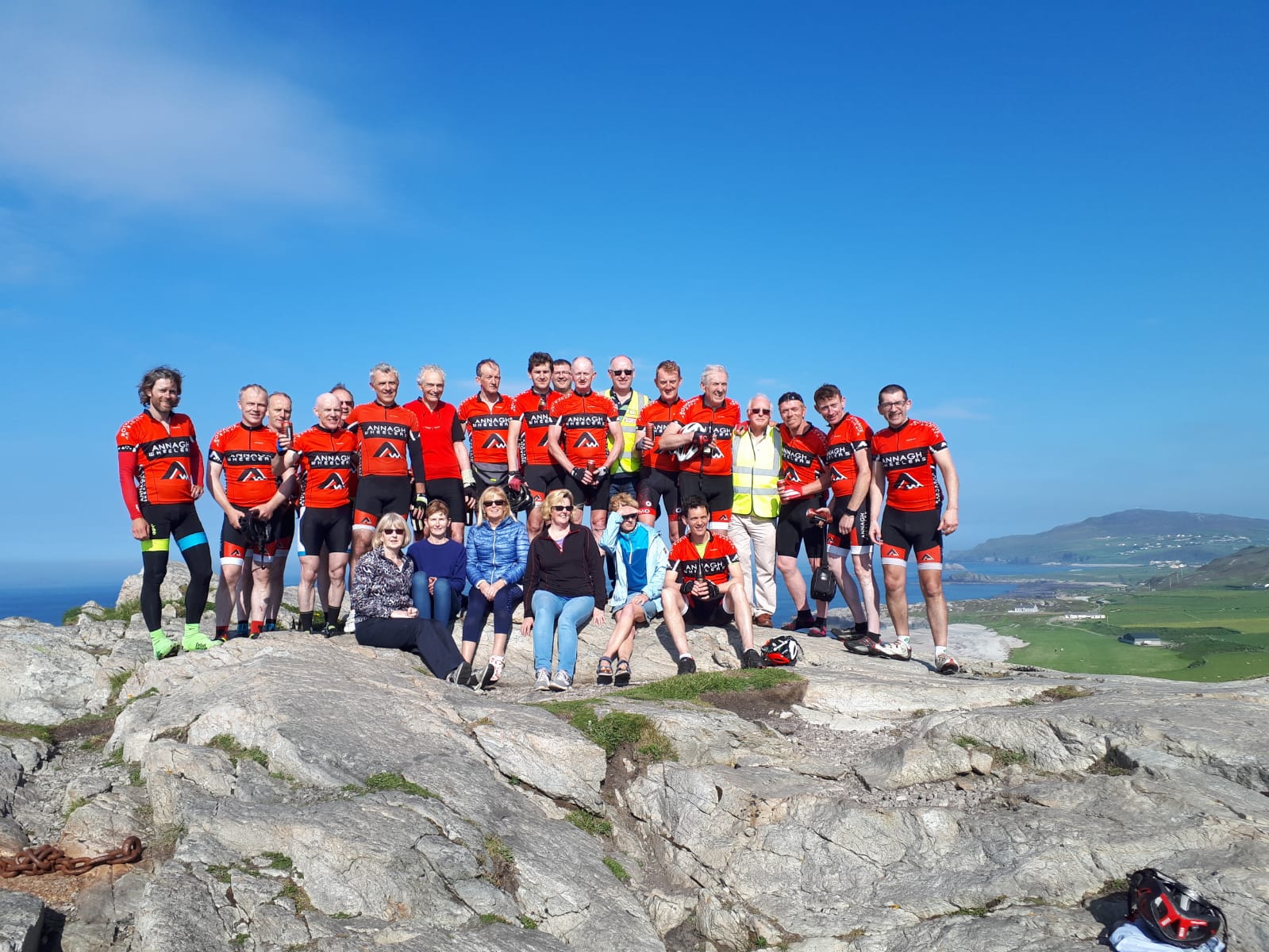 Why Mizen to Malin?

Mizen Head is the most Southerly point in Ireland and Malin Head is the most northerly.  As the crow flies, the two points are 466 km (290 mi) apart but you end up covering around 600km sticking to the road network. Many cycling clubs use Mizen to Malin as a challenge to raise funds for charity and most choose to cover it over 3-5 days.

I am a member of a club called Annagh Wheelers and 20 years ago a group from the club managed to complete the challenge in just under 24 hours. We decided to try it again in 2018. Our main objectives were

Annagh Wheelers is a very active club so any member signing up had plenty of miles in their legs. Our target date was June 03rd and most members had cycled 4000km plus for the first 5 months of 2018. We also did some long cycles, 250km+ during April and May and most weekends included a 200km+ cycle. Some members also did a small amount of night cycling. Personally, I had covered 5000km between Jan and May and had completed around five 200km+ cycles.

Click on the training schedule button to learn more about how I prepared for the challenge.

It is easy to get a route plan for Mizen to Malin as many cycling clubs publish information online. This is the route we picked and you can see the location of the 10 food stops.

However, make sure you do some research in advance and watch out for planned roadworks or other events. We arrived in Derry to find that the city center was closed due to a marathon event. Not a lot we could do but we should have known in advance. Diversions or delays can be very costly.

Check the locations for your food stops and make sure there is enough space to pull in off the road and that you will have permission to do so. We had a stop in a school car park and we got questioned if we had permission to do this.

We set up a WhatsApp group which was useful for sharing info. All cyclists and support staff were added to this group. We also had 4 meetings which were well attended, a weekly meeting was held in the 2 weeks leading up to the challenge. Ideally, you should have a list of who is responsible for calling and chairing each meeting. It cannot be the same person unless someone volunteers.

Our plan was to do the route from south to north and we booked Ballyliffin Lodge Hotel & Spa months in advance. This was approx 30km from the finish. They gave us a great deal and the staff were super friendly. However, a week before we were to do the challenge the wind was forecast to come from the North and we made a backup plan. Found a hotel in Bantry and made a provisional booking. We finally decided on the direction to take 3 days before the event.

What You Need: Support Staff and Vehicles

A group sub-24hr Mizen to Malin cycle needs a lot of support. It can be just as hard driving and moving food boxes around as it is cycling. For our challenge, we had 1 van and 3 cars plus another van joined at the halfway point.

One support vehicle stayed with the cyclists at all times and had a flashing orange beacon plus warning signs affixed. This car also carried spare wheels, tubes, spare bike and toolkit. The other cars were used to ferry food boxes around and each had a driver and passenger. Support staff changed roles every 4 hours so that no one was stuck doing the same job.

Two of our support staff joined the cyclists at various times to provide some fresh legs to keep the pace up and they were someone new to talk to.

One thing to watch out for is that you may need to hire a minibus to transfer a large group of 10+. Most vans will only have 2-3 seats. In our case we had to hire a taxi to drop a group to Mizen and then collect them again in Malin. Make sure you factor this into your costs.

Test out your bike racking system in advance. We managed to fit around 10 bikes into a high roofed Transit. Othe bikes travelled to the start point on car-bike carriers.

What You Need: Equipment

What You Need: Food

Each cyclist was assigned a clear plastic box and they were responsible for filling this. Each box was numbered and boxes were placed in order at the food stops. In our case, the weather was warm so we had to avoid certain foods which may have spoiled. I brought along wraps, cans of coke, biscuits, fruit, and sweets.

Support staff did prepare some warm food at certain stops and they also provided tea\coffee where possible. However, plan that each cyclist is self-sufficient and the warm food comes as a bonus.

You can not bring too much water. A local company sponsored 100 500ml bottles of water and we used them all 80% into the challenge.

Also, don’t forget to pack a few beers for celebrating at the end of the cycle!

We had agreed in advance that cyclists would cover all costs for food, equipment, and support. We decided on €200 per cyclist which was put into a kitty a week before the event. This cash was then used to buy what we needed and to cover costs like diesel during the event.

During the cycle, you need to be super efficient with the food stops. Our plan included 10 ten minute stops. We had a large brass bell which was rung when there were 2 minutes remaining and it was rung again when it was time to get moving. Any cyclist who was delayed had to work back to the group. We had one chaotic food stop around 10pm when the cyclists and support staff were surrounded by midges. The 10 minutes were spent running around trying to stop them biting. Maybe fly repellant would have helped.

Make sure you get through Derry at a quiet time

If you are aiming to complete Mizen to Malin in a quick time, make sure you get through the city of Derry during an off-peak time. There are limited bridges over the River Foyle which passes through Derry. We got it wrong and arrived at a very busy time with half the city shut down to cater for a marathon. We lost a fair bit of time and most of our support vehicles were held up for ages. For a fast time you really need to be passing through Derry early morning or late evening.

People get tired on events like Mizen to Malin and conflicts can develop. However, if you follow some basic rules you can avoid most of them. Try and avoid:

At many times during the day, cyclists started flagging. Very important that they let this be known so that the group could adjust. Don’t assume someone else will shout out on your behalf. If someone had continued to slow down then hope they have the maturity to hop into the support vehicle, thankfully we did not come to this stage.

We had a few unscheduled toilet stops. In most cases, the whole group stopped but for a few the cyclist stopped and then got back by following the support car. The same would have applied for breakdowns if the cyclist was strong enough they could cycle back to the group, if not then they would hop into the support vehicle, get sorted and get dropped out 2-3 km up the road

I would like to thank my club members who participated in the event. We all helped each other on the day. A massive thanks too to all the support staff. Without them, it would have been a failure. The video below shows us reaching the finish line at Malin Head.

I did some fundraising in the lead up to the challenge. Main parts were an online donation link and I also ran a 25 card game. As of July 13th 2018, I have raised €8050 for the Mayo Roscommon Hospice.

If you want to raise funds for a similar challenge my advice is to not to depend on online activities only. Host a quiz, set up a turbo trainer outside a supermarket. Do something where people gather and use this to promote your online efforts.